So much has been going on here at the rabbit hole.  Two weddings, a new nephew,  our first anniversary and my birthday, with karaoke.   Also craft projects, lots of Monday night family podcast dinners and a snow storm.

There was a snow storm here in New England on Saturday the 29th of October.  October is a little early for snow even here in the frozen north.  As a result much of Connecticut was without power for days and in some cases over a week.  We were very lucky we did not lose power though much of our town did and a lot of our friends didn’t have power for days.  We had our friends here nearly every night charging cell phones and keeping warm, it was like a week long epic sleepover,  and mostly I was just glad I could help them out when they needed it.

About my lack of posts lately,  I have set a personal goal to update at least once a week likely on Fridays.  I am trying to get posts written ahead of time so there won’t be anymore long gaps.  Maybe you will forgive me if I tell you about the projects I’ve been working on.

Secret Project X – A gift for my friend Jeri.  Jeri is a Shakespeare scholar  and maybe a tiny bit superstitious.  She refuses to say the name of the play “Macbeth” out loud, because it is considered bad luck in the theater.  If someone else says Macbeth she will respond with the phrase  ” Angels and ministers of grace defend us.”   So as a gift I stitched the “Angels and Ministers” quote on a canvas  (yes, and actual artists canvas).  Sort of like an old fashioned sampler.   I have never stitched on canvas before, it’s a little bulkier to work with and the needle has to be very sharp to get through the fabric.  Other than that it was just like stitching on a hoop and actually easier than things like tote bags that have less room for your hands to move around.  I did the entire thing in a satin stitch and it came out pretty good.  Here’s a picture of Jeri with it. 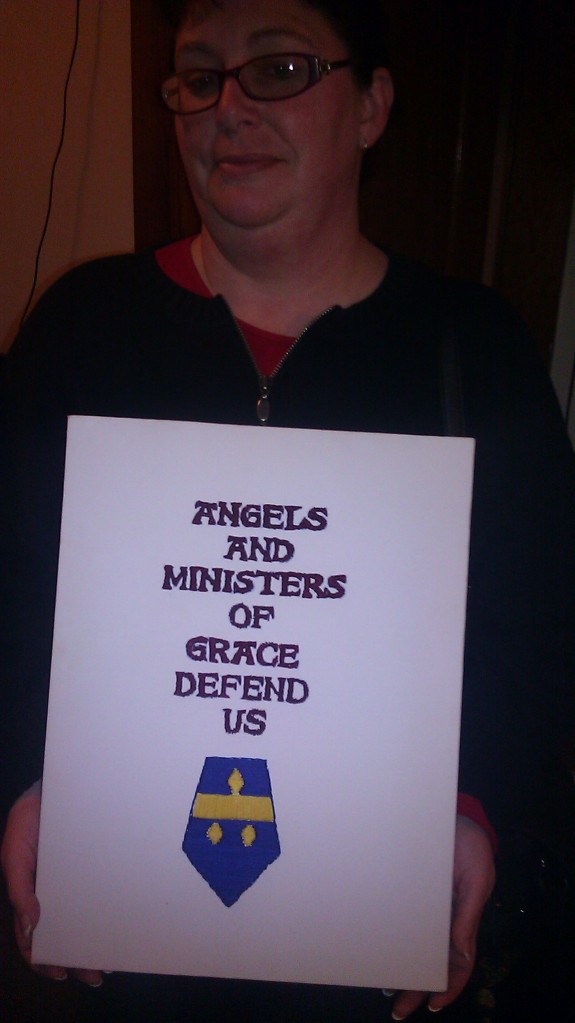 In other news got some awesome home crafty books in the last few weeks, one filled with canning recipes from my awesome husband.  Canning is one of the projects I have been dying to take on.  I am thinking of doing salt preserved lemons first.

The other book is a beginners knitting how to book.  I am teaching myself to knit.  So far?  My stitches are terribly uneven and I am clumsy at it, but I think I am figuring it out.  I promise to post picture of what are sure to be my less than beautiful results.

That’s it for now, leave me a comment and let me know what you are working on.  What you’ve made or what you want to learn.  And have an awesome weekend!

I cook stuff, I make stuff, I clean stuff and I love doing it. View all posts by punkbunnie